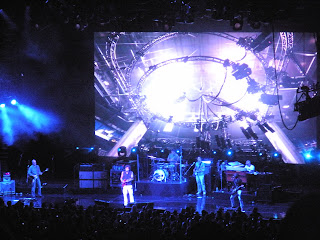 I’ve been a John Mayer fan for a while now. I know the guy gets a bad rap in the public eye, and I realize that people have really strong feelings about him, one way or the other, but personally, I like him. I won’t get into the why or how of all that, but I have written a post about my feelings about him, his persona, and his talent here if you are curious.

This is about the concert I attended on Friday, August 6, and the fact that talent wise, this man is pure genius. 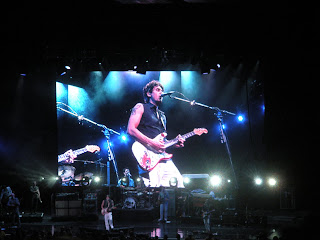 If you’re at all familiar with John Mayer’s music, then you know that with him, it’s all about his guitar, and his voice. There’s no fanfare, no light show, no costumes…he just plays his instruments and sings. It’s also, very much, about the lyrics.

Anyway, after a pretty unexciting opener by Train, John Mayer took the stage. I suppose, in all fairness, I should note that it wasn’t that Train weren’t good, I’m just not a big fan, and wasn’t overly attentive to their performance. I think they did a fairly good job, people seemed to be enjoying them and having a good time.

But I was there for John Mayer.

He took the stage and started off with "Vultures", followed by "Clarity", and then his current hit "Heartbreak Warfare".

At one point he launched into this crazy guitar solo. When he took the guitar off his torso and placed it on the floor, and continued to play, I knew we were in for a treat.

The rest of the Set list was as follows: Ain't No Sunshine "Bill Withers Cover", Who Says, Why Georgia, Perfectly Lonely (one of my favorites by him, and a point in the concert where he really connected with the audience and had us all laughing with him); War Of My Life, Waiting On The World To Change, Gravity, Do You Know Me, Raspberry Beret (Prince Cover) - Which was SOOOO good, Half of my Heart. 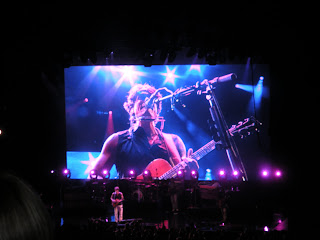 When the lights went out, we knew he'd be out for an Encore. because, after all, when does a concert not include an encore now a days? Encore: Free Fallin' (Tom Petty Cover). Your Body is a Wonderland. Edge of Desire.

The surprise here was that for his Encore, John showed up not on stage, but amidst the audience, with just his guitar, singing a cover of Tom Petty’s Free Fallin’, quite possibly my favorite moment of the evening.


He then returned to stage for a few more songs (Your Body is a Wonderland - another favorite of mine) and Edge of Desire, before signing off for the night. 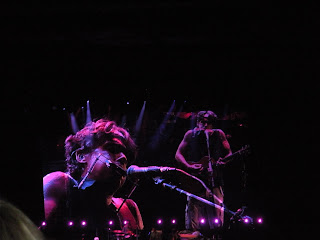 In between sets, John colored the show with his easy banter with the audience. He told a few stories about his songs, he related to this particular audience reflecting back on his days in Boston, when he was attending Berklee, he talked about love, heartbreak, success and hardship. And he was humble, and sweet as he thanked his fans for supporting him and standing by him even when he stumbles on this road through fame. 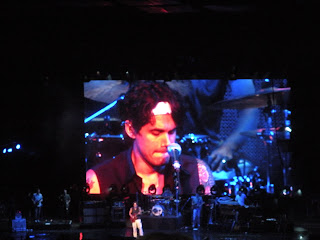 He was exactly as I expected him to be on stage. Serious and joking. Giving his ALL to his performance, but not taking himself too seriously. He connected, and he delivered. And I think I’d rank this at the top of my favorite concerts attended. Yes, it was that good.

I’d definitely go see him again. Maybe not 27 times, like the lady in line in the bathroom has…but a few more times, yes. 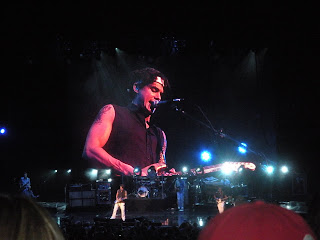 Sounds like a really good concert!! I don't listen to the mainstream music much these days, but I remember liking the different things I heard from him a few years ago.

Ok, I really know very little about current music (wait - what was that-- was that the sound of you unfollowing me on Twitter??? No! Don't!) ;)

So, I knew absolutely NONE of the songs you mentioned. EXCEPT Free Fallin! I was a Tom Petty fan in High School. Back in my "rebel" days. ;)

So glad you had a good time -- John Mayer is my all-time favorite artist, and I love him so much! This summer tour is actually the first I haven't attended since I first saw him perform in 2004... I've been to eight concerts, including one in February, and I just couldn't make it to his D.C. show in July. My heart hurt reading your post, haha! "Edge Of Desire" is one of my favorite JM tunes. Thanks for letting me live just a little bit of the evening through your post! :)