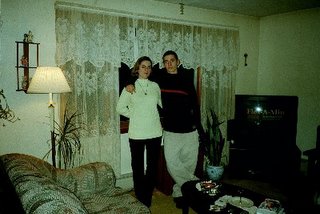 It’s my brother’s 22nd birthday today(okay yesterday, I wrote this and then forgot to post it). Twenty FREAKIN’ TWO…wow, I changed that kid’s diapers and now he’s 22. I’m old! So, in honor of his birthday, (even though he doesn’t read my blog), I’m going to take a little trip down memory lane as Shortstuff’s older sister. FYI, Shortstuff is what I used to call him when he was really my "little" brother, he's taller than me now, but he'll always be my baby brother.
Shortstuff and I have always gotten along great! Maybe it’s due to the 9-year age difference, but I don’t ever remember having a fight with him. That’s a lot to be said for siblings who lived under the same roof for almost 20 years. Especially with both of us being as hot tempered as we are/were.
I have such great memories of him as a little guy. I was so excited to have a little brother when he came along, having been an only child for 9 years. I thought he was the greatest thing ever. Of all my memories of him as a baby, two particular ones stand out. The first is of the first time he walked (more than just a few steps). If I have this right, this was the first time. My dad and I were in my room trying to make him walk, or maybe it was my Grandma Ana and I, either way, I remember I had this cute little purse, and I gave it to him and told him to go show my mom, who was in the kitchen. And all excited, he walked into the kitchen to show her. He’d probably kill me now for telling this story, but I remember it very clearly, he walked the first time to show my mom my purse.
The second is of a game we used to play when he was maybe 11 months to a year. I used to lay a blanket out on the floor, lay him down on a corner of it, and roll him up into the blanket. Then I would throw him over my shoulder and walk around the house asking my parents if they wanted a sausage (or actually, since this was in Portugal, a chourico) and Shortstuff would giggle hysterically. God, he was so freakin’ cute!
As we grew up, I never thought of him as a pest. I know a lot of older siblings have that reaction to their younger siblings, but maybe it was because he was so much younger than me that he never was old enough to actually “be a pest”. When he was a kid, he was cute, when he became a pre-teen, I was already too old for him to “bother me”. Instead, we would have these great conversations. He would talk to me about things that he didn’t necessarily want to talk to my parents about, and I was always a good sounding board for things that he did want to ask them, but wanted to see how I thought they’d react. Through the years, I was always the person telling my parents “oh, let him go” or “let him do it”, but I was also the one behind the scenes who would tell him “you can’t do that and you know it, so don’t even put mom and dad through that”. It was an interesting dynamic. He actually listened to me sometimes.
It was interesting too, to see him go through the personality/identity changes that teenagers will go through. He went from a hip-hop; jeans around his knees kid to a all black, dyed hair, piercings in his lips punk rocker in a matter of a year or so. As his big sister, it was funny to see how completely different the two of us were.
Another great memory that I have is of a trip we took a few years ago to California to visit my cousin. We spent a week together, 24/7 and we had a great time. I hope I get to take more trips with him in the future it was a blast.
Now that I don’t live at home, we have a weekly family dinner at mom’s and no matter how busy he always is with his friends, he makes it a point to be there for that dinner. I always enjoy the time I get to spend with my family that night, and Shortstuff never fails to entertain with his silly stories. The kid is a real comedian.
And today, he’s 22. He’s all grown up, and the part of me that’s always been “motherly” toward him is all emotional and crap. I’m proud of the man he’s becoming. He’s a good guy, he’s sweet, he’s funny, he’s a hard worker, always puts his family first, and is a genuinely good guy (when he wants to be). ;-) He's also outgrowing his punk rock stage more and more each day and he now looks...I don't want to say normal, but he looks good, healthy...a lot like in the picture above, only older.
And I know I sound all gushy and weird, but I’m proud to be his big sister, and I’m really enjoying watching him grow up. Wow, and I’m not even his mother, imagine what I’ll be like when it’s my kid?
So, tonight we are going on our new (within the last 2 years or so) traditional birthday dinner out to Tokyo Japanese Steakhouse, our favorite. YUMMMY…And I’ll have to make sure to let the waiters know to sing the Japanese Happy Song to him. After all, I love him, but it’s no fun if I can’t embarrass him!
Happy Birthday Shortstuff!!
PS: Yes, the picture is an old picture, but it was the only one I could find, and besides, I was skinny then!
Candidly by Karina

Email ThisBlogThis!Share to TwitterShare to FacebookShare to Pinterest
Labels: family

What a great tribute to your brother. My older brother and I are 6 years apart and we didn't have it so tranquil, but I was always protected and loved and knew it. Siblings are such a blessing!