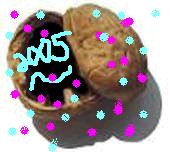 I wanted to put together a list of the good, the bad and the ugly for 2005, but unfortunately, I have a terrible memory, and am a horrible record keeper, so I can’t remember anything I did before October. Did I go to the movies? Did I read any good books? What songs did I really like? I can’t remember mostly. Sad isn’t it? I must keep better records next year.

So, I’m going to attempt this, but it’s definitely not going to be an all inclusive list, these are just a few of my favorite (and not so favorite) things from 2005:

MOVIES – This list shall include not only movies, which were released this year, but also older movies, which I just finally watched:

Some of the good movies I saw this year:

“Harry Potter and the Goblet of Fire” – my favorite of the series so far
“RockStar” –Yes, I only just saw it this weekend, but I enjoyed it a lot
“What’s Eating Gilbert Grape” – What the heck took me so long to see this movie? It was great.
“Garden State” – I loved this movie
“Mystic River” – Very sad, but a great movie
“Sisterhood of the Traveling Pants” – Total little girl chick flick…I loved it
“Gangs of New York” – Another sad, but really good movie
“The Notebook” –Sappy, sad, cried like a baby…my favorite kind of movie
“Pirates of the Caribbean” – Very cute, can’t wait for the sequel
“Shark’s Tale” – It was cute
“Charlie and the Chocolate Factory” – It wasn’t great, but it was good, and Johnny Depp did a great job.
“Paparazzi” – Kickass movie, I love it when the good guy is crazy
“Mona Lisa Smile” - really cute
“Day After Tomorrow” – Not the greatest movie, but it was fun to watch, I love “end of the world” flicks

Of these, I’d probably say it’s a tie between Harry Potter, Pirates and The Notebook for my favorites.

Worst – scratch that – STUPIDEST movies I saw this year:

“Spanglish” – Watched it on the flight from/to (can’t remember which) Vegas…didn’t get it
“Eternal Sunshine of the Spotless Mind” – I should now better, I hate Jim Carey…and HUH?
“Closer” – Double HUH? Oh Natalie Portman how can you go from Garden State to this piece of trash?
And the NUMBER ONE dumbest movie EVER:
“I Heart Huckabees” – HUH doesn’t even begin to describe it…somebody please tell me what the heck this movie was about? At least Mark Wahlberg was hilarious in it, even though I didn’t get a word his character was saying.

“The Corpse Bride” – it was too short, and not at all original. I was expecting more, something different, I don’t know, I was very disappointed in it.

I didn’t read quite as much this year as I wanted to, but with the help of Audio books, I read more than I would have otherwise.

I know I read a book or two I didn’t particularly like, but I can’t remember their titles.

Books I read that I really liked:

“Harry Potter and the Order of the Phoenix” –I held off on reading this until book 6 was released and then read them back to back
“Harry Potter and the Half Blood Prince” – HOLY TISSUES that’s all I have to say
“Lazarus Vendetta” – Robert Ludlum/Patrick Larkin – Who knew I was into this whole “technological terrorism” stuff…huh!
“Magical Thinking” – Augusten Burroughs – he just cracks me up
“The Wedding” – Nicholas Sparks – A follow up to “The Notebook” really sweet
“The Davinci Code” – Dan Brown – worthy of all the hoopla
“Digital Fortress” – Dan Brown – Equally as good as DaVinci Code
“Angels and Demons” – Dan Brown - I’m cheating here because I’m only half way into this one, but I love it already and can’t put it down.
“Queen of the Slayers”- Nancy Holder – The story of what happens to Buffy and crew after the end of the show…good book
“Jane Eyre” – Charlotte Bronte – It took me a LONG time to get through this book, but man am I glad I read it.
Stephen King’s “The Dark Tower” series, books 1, 2 and 3 (which I’m almost done) – I’m really enjoying these, and love that I’ll have 4 more to go after this, but hate that I’ll have four more to go before I find out the conclusion…which I could “hear” them faster.

I read more, but I can’t remember what…I’m not picking a favorite book, I can’t, they were all great.

Artist that I was surprised I liked every song she released this year: Kelly Clarkson
Song that made me cry every time I heard it: Tim McGraw’s “Live like you were dying”
Best “duo” – Jay –Z; Linkin Park “Numb/Encore” For some reason, I love this song.
Group I started the year off liking, ended the year being sick of: Black Eyed Peas
Most annoying and over-played hope I never hear this song again: Chris Brown “Run it”
Favorite song that was over-played but I still like it: “Don’t’cha” The Pussy Cat Dolls
Best Album (which is really not fair since I only got TWO albums this year but) Santana – All that I am
Other artists I enjoyed this year: Shakira, Bon Jovi, Nickelback, Gwen Stefani, Anna Nalick, LifeHouse; John Legend and I’m sure others I can’t remember.

Best shows: Prison Break, Lost (even though it ‘lost’ some of it’s appeal in the second season), ER, Grey’s Anatomy, Degrassi –The Next Generation (yes, I’m twelve), Bones (who knew David Boreanez could be funny?).

Best Show that TIVO discovered for me: The Ellen Degeneres Show – I just love her, she’s so funny.

I won’t name any worst(s) because I simply didn’t watch anything I didn’t immediately like.

CELEBRITIES (I know I’m too old for this crap, but it’s my guilty pleasure, so leave me to my celebrity gossip, will you?):
Celebrity that I lost all respect for this year and am so sick of hearing about: Tom Cruise
Second celebrity I’m sick of hearing about: Jessica Simpson…enough already
Celebrity that gained my respect this year after her appearance on Oprah and Ellen: Reese Witherspoon, now there’s a classy smart lady. I like her
Hottest male celebrity: This is a toughie, but I’m going to give it to Wentworth Miller because I can! ;-) Followed closely by about 10 other actors.
Celebrity who made a comeback but I think is completely washed out: Madonna (I’m sorry, I just don’t get it anymore), closely followed by Mariah Carey (but she had Wentworth Miller in her video, so that redeems her some).
Celebrity who belongs in jail the most: Michael Jackson (I’m sorry, but he does)

RANDOM:
Favorite Purchase this year: My new glasses and TIVO (they’re tied)
Favorite place I went: Vegas (again not fair, since I didn’t really go anywhere else but New York, which although I love, it’s not quite Vegas)
Best addition to the household: Calla Lilly followed closely by my new couch

Worst News “event” of 2005: The Tsunami and Hurricane Katrina (Hurricane Season actually). Actually, 2005 was a bad year all around for natural disasters, wars, bombings, murders (Boston has surpassed it’s 10 year high in homicides), ugh…Come on people, get a grip huh? THIS is why I usually don’t watch the news.

Best thing about 2005: All the time I spent with my friends and family. Sappy but true.

There you have it, some of the things that entertained me (or not) this year.
Candidly by Karina