No time for an elaborate post this morning...but I promisse full details later on. In the meantime, I'm asking for your votes in a poll on my sidebar.
A little quick background story before that...I was a die hard NKOTB (That's New Kids on the Block for the un-initiated) fan back in the day. WHen they announced their reunion this year, I was all over it. Last night I went to my second concert of the tour, had a blast, and then after the show, met Donnie Wahlberg, who was always my favorite. (MERE INCHES from me here...my hand might or might not have been on his arm at this point).

He was, basically, THE teen idol of my lifetime, the one celebrity I still sort of melt over whenever I see him anyway (yes, I'm in my 30's, AND?)
So, yeah, met him last night. More on that later, but he did this: 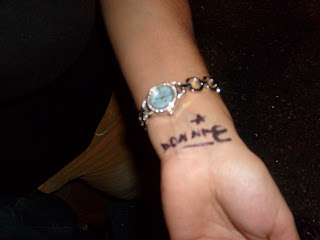 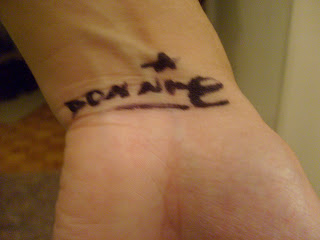 So, here's where the poll comes in, to tattoo, or not to tattoo? Check the sidebar, let me know...
Candidly by Karina

Just remember, tattoos are FOREVER (not just this year or this decade), and they hurt more to remove than to put on. On your wrist is tough to hide, too, although I've considered one there that says, "Choose life!"

That being said, if you're gonna do it, better hustle on down there while you still have the signature!

I vote for the subtle star but like Lisa above said, tattoos are forever, well, until you have them remove but it is forever in a way, but hey if you want to - go for it!

I'd vote no. But only because I wouldn't do it not because I don't think you should or shouldn't.

Looks like a pretty painful spot, couldn't he have signed somewhere just a little tougher? :) Maybe start with the star and see if you can handle the rest?

The poll won't let me vote. But I vote yes and as soon as hubs saw the photo and I told him what it was he said, "You know what she should do, she should go get it tatooed over" So, that's two yes votes. :)

Be sure to consider the pain factor. The wrist is a painful spot to tattoo.