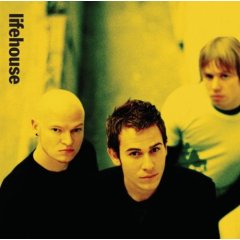 In keeping with my new year’s resolution to LIVE life a bit more this year, I went out on a “school” night this week! Yep, I’m living dangerously folks.

My friend N had mentioned at the beginning of the year that Lifehouse would be playing at a Boston nightclub in February, and did I want to go. Not really sure who Lifehouse were, but being familiar with their one song that the radio plays INCESSANTLY “You and Me”, and actually really liking the song, I agreed. I then actually decided to make the concert ticket her birthday present, and so the plan was made. In case you don't know, this is lifehouse: http://www.lifehousemusic.com/

I used to love going to concerts. I love music, and I love live music that much more. For years, starting in highschool, all the way through the end of college, there wasn’t a summer that wasn’t populated with various concert attendances. I’ve seen everyone from New Kids on the Block (yep, I said it) to Aerosmith. One of these days I’ll have to do an entry about all the concerts I’ve been to, but that’s for another day.

Anyway, as I’ve gotten older, and funds have gotten tighter, time and money have prevented me from going to as many concerts. So, it’s always nice when a reasonably priced opportunity to see a live band presents itself.

Not wanting to be clueless at this concert, I borrowed N’s Lifehouse cds, burnt them onto the mp3 player, and studied up on the band. Turns out I really like their music. BONUS.

So, the concert was last night. After a “so not on my diet” dinner at Boston Beer Works, we headed over to Avalon for the show. The opening act, a girl by the name of Mozella, was performing when we got there. She was actually pretty good. Sounded a bit like “Nelly Furtado” but more rock then pop. Folksy. Different. If you’re curious, go here: http://www.mozellamusic.com/

This being a general admission show, we managed to work our way all the way to the front, a little off to the side of the stage. We were pretty much standing right by the velvet rope to the area where the bouncers were hanging out to keep crazy fans from...I don't know...rushing the stage or something. We wound up having a fun time just joking around with the bouncers before the show even started. Except for this one guy who was on a major power trip. He was an idiot.

Anyway, then Lifehouse came out. Huh, these guys are pretty young. I had no idea what they even looked like, so it was kind of fun to even just see them and find out what they looked like. They’re an odd bunch, the lead singer has a “Charlie from Lost” look to him, the guitarist looks like a surfer dude, the drummer is more of a punk rock, shaved head looking guy, and the bassist had that rough n’ tough look to him. But they sounded great. You know how sometimes you’ll go see a musician live, and you realize that the only reason their album sounds good is because it’s all digitally re-mastered or whatever? This wasn’t the case at all. These guys sounded better live than on the cds. The lead singer has a great voice, and they all play with passion. They take this stuff seriously, but also have fun performing it. It was a great show, and I’m really glad we went.

I also had another one of those “man, I’m getting old” moments. Actually, I had a few of them last night. There were the obvious ones, when all the teenybopper girls (the show was an all ages show) were squealing in delight, and I thought my eardrums were going to burst, the fact that my back was killing me and I just wanted to sit down for FIVE minutes, those moments. And then there was the big one. At one point Jason Wade (the lead singer), jumped off the stage, and ran over RIGHT to where we were standing. He actually stopped about two feet from me to sing for a while. I thought it was pretty cool of him to do that, but that was the extent of my excitement. The little girls around me were all going insane, hearts aflutter “Oh my God I touched him”. And I thought to myself “huh…not so much”. Actually, truth be told, I also touched him, but I didn’t mean to, but IDIOT above mentioned bouncer decided that I was obviously a threat, and in his rush to protect Mr. Wade from me, actually pushed me INTO him. It wasn’t a full on collision or anything, just a “oh, oops, okay balance is back” moment. But it was funny, because all I was thinking was “please don’t let me get trampled”. Yep, I’m getting old.

All in all it was a good show, great night, and the best part is, I’m obviously not THAT old, because even though I was out until…gasp…midnight, I had no more trouble getting up this morning than usual (which is to say, it sucked, but not any more than it always does).
Hmmm, what concert can I go to next?
Candidly by Karina

Email ThisBlogThis!Share to TwitterShare to FacebookShare to Pinterest
Labels: music

Very nice. I love those moments. ;)

You're doing great by the way. Welcome to blogging!

I hope you'll come back and visit more often.

I will see you soon.

Thanks Amber. I did have fun at the show.