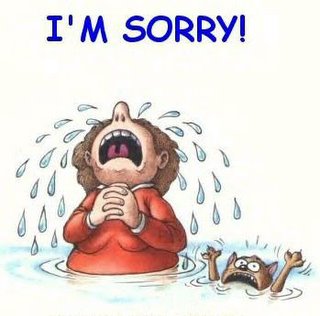 I have been a bad bad blogger! And knowing you all wait on baited breath for my witty entries, how dare I neglect you for so long! Yeah, okay, we all no nobody really reads this thing, which actually means that at the moment I’m referring to myself in the plural, and that’s just sad.

Alas, in the hopes that someday I will be discovered in the blog world and become famous and widely “read”, I plod on.

So, to my imaginary audience, I apologize and promise to try and be more consistent in my entries. I will try not to let my quest of a more active social life impair my blogging.

That said, although I have found myself busier both in and out of work, there really is nothing much of interest going on with me. Go figure.

I finished Memoirs of a Geisha on Audio yesterday, and really loved the book. Can’t wait to watch the movie now. I had a weird dream about the book/movie last night, and about how they changed the movie to be more “appealing” to Hollywood, and one particular change they made. It’s not all that strange that I would dream about the book, after all, I did just finish “reading” it, but the interesting thing will be to see if my dream about the change to it in the movie will prove true. I will be EXTREMELY freaked if it does, because I have now experienced two creepy “I dreamt this last night” scenarios in the last 2 weeks. The first, was when I dreamt that I would step on a scale and see a certain weight, which was 3 pounds less than I expected to weigh, and then the very next day I stepped on the scale, and wouldn’t you know it, same exact weight to the half pound as in my dream…huh! The second, was a strange fight with a co-worker about stuff being moved around in the office, and lo and behold, I come into work the next day, and one of the first things I notice is that a picture that was hanging on a wall upstairs is now hanging on a wall downstairs. Turns out over the weekend, some furniture was re-arranged in the boss’s office. HUH! I must be careful what I dream of!

I watched Gothica this weekend. I have had this movie TIVOed for almost a year now, but since moving into my condo (and living alone) I have become a big fat chicken and can’t watch scary movies. SO, even though I really wanted to see Gothica, I couldn’t bring myself to do it. Sunday, however, in a lazy “staying in my pj’s all day and not doing a damn thing around the house” stupor, I decided that I’d be okay to watch it at 4:30PM because I’d forget all about the scary by bedtime. I loved the movie. It was creepy and strange and just fun to watch, even though I kept yelling at my cat because she thought it was funny to jump out at me from nowhere every now and again. Guess she thought it was really funny when I screamed the first time. Great! OH, and the scary was indeed forgotten until bedtime, right up until I shut off the light, and then suddenly, there it was, in all it’s gory glory. MUST.NOT.WATCH.SCARY.MOVIES.ALONE. p.s. It’s fun to watch Halle Berry look ragged and hurt looking! Makes one feel good about herself.
I am going semi-away this weekend. I say semi because I am only going to the neighboring state, and I’m only staying out for one night, but hey, I won’t be sleeping in my own bed, therefore, away. I am going with a friend, and some friends of hers, and we are leaving Friday after work. We are having dinner at a restaurant with very promising sounding martinis, staying at a hotel, which supposedly has a great spa. The initial plan was to have a Spa day on Saturday. Of course, poor planning on our parts has led to NO spa appointments available for us, so we will now be shopping at some local outlets on Saturday instead. We will also stop at a college hockey game on the way home. Those of you who know me just went “huh? Did she just say college hockey game?” Yes, I know this is very unlike me. No, I have not suddenly developed an interest in sports. To be fully honest, I’m not even all that interested in going to this game, but my friend wanted to go, we’ll be in the area, and I don’t have any better plans for Saturday night, so whatever. I’ll go flirt with some college boys and pretend I’m younger than I am.

I am truly going away in May! I will be going to Mexico, thankyouverymuch. Somehow, on the day after Christmas, at a family lunch with my parents, grandfather, my brother’s godparents and their 23/24 year old daughter, I agreed to a trip with all of the above. Since I’ve always gotten along well with what I’ll call the “older folks”, and have actually been accused of being “an old soul” on various occasions, I’m actually very much looking forward to this trip, I know it will be fun. Plus, there is the 23/24 year old as well, and I’m sure we’ll have fun together. But this is where it gets sort of strange, because I babysat that girl, and now I’m going to be drinking with her? ODD. This is one of those “all-inclusive” deals, that allows for a whole lot of eating, and a WHOLE lot of drinking. I’m not a heavy drinker, but when all drinks are free (okay, paid for) and you don’t have to work the next day, hey, even I partake. I will be gone for 8 days/7 nights, and will be lounging on the beach, eating, drinking, and flirting with les mexicanos. You know you’re jealous!

I may have my first date to report back on sometime in the next few weeks. I received a call from a friend, whose husband has a single friend, and they have told this single friend about me, and said friend wants to meet me. I have agreed to a casual “group” thing, and am now just waiting for it to be set up. Not “waiting” in the sense of “why hasn’t she called yet?” more like waiting in the sense of “maybe she’ll forget all about it and I won’t have to do this”. Now, I know what you are thinking, I said I was ready to start dating again. I know this, but I didn’t really mean it! Okay, okay, maybe I did, but here’s the thing, I was kind of hoping I could just randomly meet some guy that NONE of my friends know, so that I could keep my first date a complete secret from EVERYONE that I know, and therefore not feel the pressure of “so, what do you think, do you like him?” ARGH…too much pressure. I refuse to think about it for now.

I’m still “dieting and exercising” or as I’m calling it these days I’m still on my “health plan”. As stated above, I had a nice “lost 3 pounds” moment in the first week, but then bought a new scale this weekend, and either the new scale is wrong, or more than likely, I didn’t really lose that initial weight, OR (and this is really the more likely culprit), it’s all my friend’s fault, who had a birthday last week and forced me to celebrate with big hearty dinners not once but twice in one week (never mind that I was the one that planned one of the dinners). I have definitely lost 1.5 pounds though, so at least I’m heading in the right direction. Birthday friend and I went gym shopping this past weekend, and found a gym we will be joining next week, so hopefully this will get me better results. After all, I have to go bathing suit shopping in less than 100 days! ACK!!!

American Idol has started, I freakin’ love the audition process of that show. Seriously, how much do they pay those idiots to get on national television and make complete fools of themselves? Or are we to honestly believe these people really do believe they have talent? Whatever it is, please don’t stop, I haven’t laughed this much since last year’s auditions!

Well, that’s all folks, I now return you to your regularly scheduled programming, the phone at work is ringing and nobody else is answering, so I must go now.
Candidly by Karina