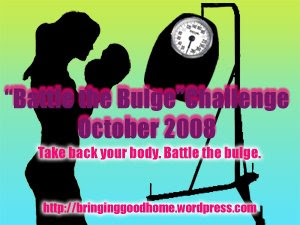 In all actuality, I started this particular battle of the bulge 5 weeks ago when I joined Jenny Craig with my mom. But seeing as I still have a little over half way to go toward my goal weight, I figured joining this challenge would just help to keep me motivated.

So, the details about my particular battle. For this, we go way back in time.

I was a skinny kid. A very skinny kid. Rail thin arms, 80 lbs soaking wet pretty much through high school. At 5’2”, tiny is a good way to describe me in those days. I always had a pretty fast metabolism, and could eat anything and everything I wanted without ever suffering the consequences. I just did NOT gain weight.

Even at college, when most people were putting on their freshman 15, I stayed skinny. So skinny, in fact, that I was constantly abused for it. Thhe thing about our culture, is that although we all want to be skinny, and we all know that it is rude to discuss someone’s weight if they happen to be overweight, we have no problems making someone feel terrible for being thin. Making them feel like less of a person because they are…well…less of a person, physically.
I was always being told by girls who were not quite as thin as I that I was so lucky to be so thin. They were right, I was. But there were also very mean things said about me due to my thinness. On one particular occasion I was told by a girl that I was “So damn skinny you make me sick”. She said this joking, laughing, but wow, talk about hurtful words. It took every ounce of my self-control for me not to respond with “You’re so fat it makes me sick”. She wasn’t even fat, chunky a little, maybe, but not even fat. But that one single comment stuck with me for so long that even now, almost 10 years later, it still hurts. And I'm not even skinny anymore!

I tell you this because you need to know my mindset and why the weight issue is so troubling for me. I was always the skinny girl. As I got older, in my early to mid twenties, my body began to change. I gained curves I’d never had before, but I was still thin. Through most of my twenties, therefore, I had a rocking body. It took no work on my part, it just was. Yes, I realize how damn lucky I was then. And then I hit the age of 27 or thereabouts and my metabolism changed completely. Little by little I began to put on weight. At first it was subtle, and when it began to pick up speed, I barely noticed. By the time I had noticed, the skinny girl was LONG gone.

Here’s the thing…I still had the “skinny girl” mentality, so it was really hard for me to realize that I was no longer the skinny girl. Almost like a reverse anorexic symptom, I would look in the mirror and not really notice how round I was getting. I still saw myself as thinner than most people, even when that wasn’t exactly true. Your mind plays tricks on you, you know?

The other thing is that at 5’2” I’m still tiny. And because of the shape of my body, if I dress well, it’s really easy to hide the extra weight for me. I carry most of it in my stomach (which I know is the unhealthiest place to carry it), so I can camouflage it pretty well. Well, to a certain point I could anyway. I have a tiny waist, I have skinny legs, and my face didn’t see any weight gain until very recently. So it was easy to “not notice” the weight. I knew it was there, but I could not focus on it as much.

Even now, as I work on my weight, I’m constantly told by others “But, you don’t need to lose weight”. Which is sweet, really, but not true. I just hide it well my friends.

But I know the history of weight gain in my family, I’ve seen my mom battle it her whole life, and I don’t want that to be my struggle, so it was time to take a stand, put a stop to it, get a handle on it.

In all honesty, I’m actually shooting for an additional 5 lbs after that, so I can have some breathing room, but I’ll cross that bridge later.

Okay, since I’ve already revealed my weight anyway, I’ll go ahead and give you photos as well. Let’s see…here’s one from over the summer, with two of my girlies, The Disciple and M&M, (I'm in black): 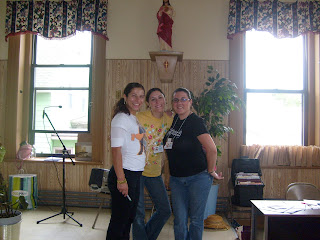 UGH. I'm not really sure where I was in weight at that time, but I'm guessing right around my starting weight. 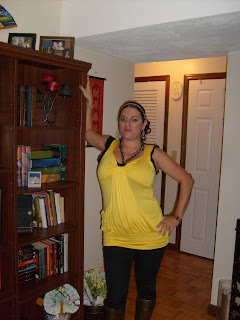 And all dolled up for my New Kids on the Block concert. Yeah, I know, I'm a groupie, leave me alone. Moving on...

So, what’s the plan then?

1. Keep up with Jenny Craig. My six week trial ends next Wednesday, but I’m going to go ahead and sign up for a one year plan, so that even after I lose the weight, I can work on maintenance with them, just for a little help keeping me on the right track.
2. In the first several weeks I was averaging between 1.5 and 2.5 lbs per week. I fell below the 1 lb range this week, so I need to step it up.
3. EXERCISE is how I’m going to step it up. I have done very little, if any in the last 5 weeks. This was actually a calculated decision, I was saving it for the second half because I knew it would get harder after a while. Now I need to add it into the equation.
4. As far as food goes, I plan on sticking with the Jenny meals until I reach my goal. They’re pricey, but they’re tasty, and I like not having to do much thinking and planning. I eat my meals, add in my fruits and veggies, and I’m good to go. I will try to find some cheaper substitutions in the following weeks, however, so that I can wean myself off the food slowly, and prepare to eat “in the real world”.

5. Check in here every Thursday and let you all know how I'm doing. My Jenny Weigh Ins are on Wednesday nights, so Thursday mornings you'll get my updates.

That’s it, that’s the plan for me. My goal is to hit the 20lb mark in the next 6 weeks. November 12th is my actually d-day. That gives me a weight loss of approximately 2 lbs per week. Not impossible, but I will have to step up the exercise for sure. I’m going to Florida that following weekend, and I’d love to reach my goal by then.

girl you are inspiring!!! your healthy approach & positive attitude will take you far (down in pounds)!

I'm totally here with you. same height approx. weight (well before baby weight) -- not fat, but def. not the thin girl that made everyone sick anymore. just enough to drive me nuts. before baby weight. right now, i dont give a care, yes i try not to gain too much, because it will be that much harder to take off later, but at this point, i love my body. i have too! it's carrying my baby! keep up the good work and know that you're not alone!

I'm a little taller than you -5' 6" - but our numbers and where we carry weight are very similar.

Hooray for your success so far! Hope the challenge helps you stay the course. Laters~

Look at you you gorgeous thang!! Congrats on the weight loss!!