Back to Africa - Thursday Thirteen #49

Last week in my Fun Monday post, I alluded to the fact that I was born in Africa. That little nugget of information seemed to spark some interest with my readers, so, as promised (although a bit later than originally intended) here is the story of how I came to be birthed in Africa...in a handy little Thursday Thirteen format:
1. Let's start with a bit of a history lesson. Don't worry, I'll keep it short and non-boring. This:

is Africa, with itty bitty Portugal above it. Okay, yes, that's geography, not history, we'll get to the history in a moment. This:

Is Angola. And up on the left coast, is Luanda, the capital of Angola (and the city I was born in). Okay, now that we've got that out of the way, onto the history. Angola was at one point a Portuguese colony. Back in the days when Portugal actually had some holdings and some power and influence...those days are gone. But, that's neither here nor there. In those days, a whole slew of Portuguese citizens relocated to Angola.
2. Among those folks, were my parents. My mom, Candid Mama, who was about 10 or 12 years old at the time (she'll correct me on this, I'm sure), with her family.
3. And my dad, who I think was slightly older when he moved there, with his family...I think. Though, I know he was in the military, so maybe he went on his own...I really need to sharpen the facts on their stories, but I'll let mom tell you those in her own time.
4. My parents tell tales of the paradise Luanda was in those days. (please click on the photo to be taken to the Flickr page for the incredible photographer who took this and many other shots of Luanda): The fun they had, the people they met, the beaches, the nightclubs, the lifestyle in general.
5. Anyway, when mom was 18, and dad was 25, they met, and in the only story of true "love at first sight" that I know, and believe in, fell in love.
6. They were married, and quite immediately, mom got pregnant with yours truly: 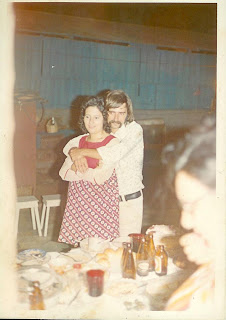 That's me in her belly.
7. Unfortunately, as much of a paradise as Luanda and Angola in general where when my parents were growing up, as the years progressed, a nasty political civil war broke out. The tales my folks tell of the curfews, the military checkpoints, completely shock and amaze me. Amaze me that they managed to survive those days pretty much unscathed.
8. I was born in the middle of this war, stories of gun shots being fired right outside the hospital, my parents coming home to find my grandmother huddled with me underneath the stairs because of the sounds of gun fire or bombs goin off, are tales I've heard my whole life. 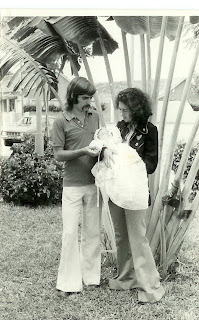 9. Eventually it all got to be a bit too much. My grandparents had left for Portugal, as had most of my parents' friends and families. And the time came for us to leave as well. In true refugee fashion, mom left first, with me in tow, as if she was simply going on a vacation to Portugal, leaving most of her worldly possessions behind. 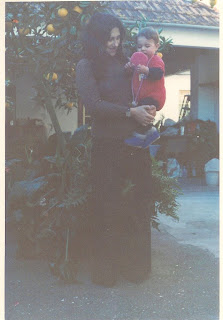 10. Only recently I learned that my dad stayed behind for another month or so before he too left, with a suitcase and nothing else.
11. In Portugal my parents moved several times (we moved about 8 times in the first 9 years of my life), finally settling in a neighborhood where there were several other refugees. I grew up with the food, the music, and the culture my parents had adopted in Africa. 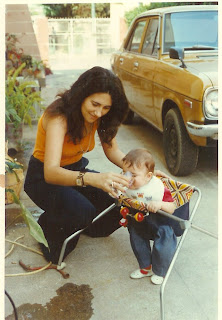 12. When I was 10 we made our move, as a family, to the U.S. All these cultures, mixed together, have made me someone who sees no color, no race but the human race. I find myself constantly wanting to learn more about different cultures, experiencing new ethnic cuisines, and surrounding myself with individuals from all walks of life.
13. I have never been back to my homeland, and as much as I would love to, I know I never will. I will hopefully one day travel to Africa, but never to Angola, never to Luanda. I have a vision of the paradise my parents speak of in my mind, and I know the reality of the war torn land would shatter those images. It breaks my heart whenever I see images such as the ones I saw on American Idol last week. The poverty, the disease, the inequality are just too heart-breaking. And yet, it is my home land, and there's something in the connection I feel to that place that can't quite be explained in words.
Click here if you want to know more about the history, struggles and present situation in and about Angola, it's a pretty good source of information.
Have a great Thursday everyone. 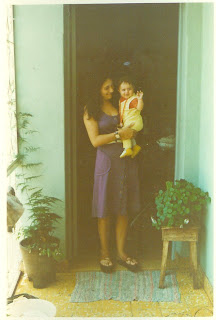 OOHh what a wonderful story!!!!!!!! and so glad you all made it ut..right what about grandma? si was born in Minnesot still in Minn.

Jettie, yes, everyone made it out. Actually my uncle, aunt and two cousins stayed behind for several more years, but eventually they too made it out, first to Portugal, then here to the U.S.

By far the best T13 I have read in a long time. I hope you get a chance to see Africa. Honestly even though my ancesters came from there I have had no desire to see the motherland. Plus I have no clue of what part of Africa my people are from originally. I am glad to be a Buckeye!

Thanks for visiting my 13 iPod song by the Mystery artist. Kate Bush has put out some great music.

That's such an interesting story. It's sad to see you say you'll NEVER go back to Luanda. I mean, maybe not anytime soon. But hopefully someday in your lifetime Angola won't be in a war and their citizens will prosper again. :)

Wow, this has to be my favorite TT so far.

Wow! What an interesting story! Thanks so much for taking the time to share it all!

You my dear have a wonderful history, thank you for sharing this part with us. Very nice, and I am glad that your family found safety.

Wow, what a story! Seems your family was very fortunate to make it out in one piece. I never knew the history of the Portugese in Angola...it's all very interesting, and despite what you say, I hope that one day...one day you'll get to go back to visit Luanda.

Thanks for sharing that bit of you with us!

So cool!!! Never say never about going back though....

you made me cry, I mean sob...
I don't know if it is because I'm a little emotional today, ok a lot emotional. But what I realy think happen here is all the memories caming back with pictures and everything. After reading all this I realy thing you should write a book about our history, as you mention before. Nice job.

Wow. That's quite a story. Thanks for sharing it.

First of all, your parents were completely groovy. Second of all, LOVED all the pictures - especially of Baby Karina!! What a GREAT T13! (cheering)

Ohhh that was SO interesting, thanks so much for sharing. And your mom is sooooo pretty!

What a great history of Karina. Sounds like a lot of things happened when you were small. My hubby came here, from Honduras, when he was 6 but I don't think it was due to war or anything like what you experienced.